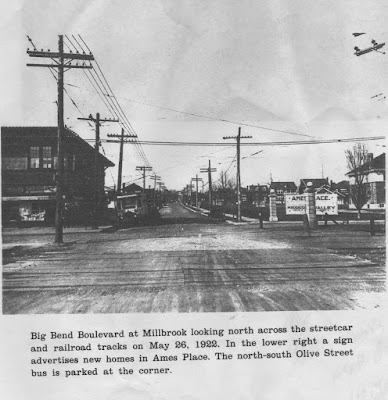 Email ThisBlogThis!Share to TwitterShare to FacebookShare to Pinterest
Labels: 1922

"It's of paramount importance to credit this photo to Robert Srenco, although I purchased this and three other really fine shots from him for a goodly amount three years ago, they are in my collection now---all four. Something like this is just wonderful to study. For example, notice the old Forest Park Parkway is not yet constructed. Shaw Park Drive runs EAST to Bemiston, it appears to be blacktop, and a smaller road runs east to Hanley. The old railroad right-of-way, south of Shaw Park Drive is a parking lot from Meramec up to the NE corner of Meramec School. The court house area is a sunken parking lot, the old courthouse and jail is there along with the 1952 courthouse."
--- David Bales

Source: Robert Srenco Photo from the collection of David Bales
1968 - View from S.W. to N.E.

Source: Newspaper clip from David Bales collection
1951 - View from S.W. to N.E.
Posted by CCF History No comments: Links to this post

Source: University City Public Library Archives
This photograph, dated September 28, 1909, appeared in "The Woman's National Daily" on October 21, 1909 as part of a series titled "Views in University City." The caption read "Forsyth Boulevard, a part of the great belt boulevard being constructed to run entirely around University City, five miles in length. The buildings of Washington University are shown in the foreground." The planned completion of the five mile circle never took place. Today, Forsyth Boulevard begins at Skinker Road just east of the St. Louis City limit and runs west into Clayton.

"These photos were purchased from the Missouri Historical Society. The first picture is identified as being 1935. I believe that is incorrect, it probably was 10 years earlier, or at least somewhat earlier. Notice there is the "Meramec" sign on the utility pole. The second photo seems to not have a sign, which we can't explain. The rail line is at a rising-angle and we know in olden times there was a rail bridge crossing Brentwood Boulevard. The street going down hill to the right would correspond with Shaw Park Drive, even as it is now. The #1 photo is shot at a southwest angle, but #2 is shot straight south. The broken "support shaft" on the utility pole shows in both photos----no homes across the rail line in the #1 photo but they show in #2 photo. Also, there is a telephone line on the far side of the rail line and a primitive street light at the intersection. So, I believe photo #2 may be 1935 but the #1 photo was earlier. If you study photo #2 carefully, there is an obvious large tree at the left center and UNDER the tree can be seen a house in the distance. Because of depth-of-field of a camera, the tree is close to the intersection, and the home is farther away than the photo shows. The home has a large limestone arch around the front door. I went looking for that house in Davis Place and found it! It is 8010 Rosaline Drive, which is the second block South of the Forest Park Parkway and MetroLink nowadays. In 1935, the visual from the Meramec corner is without obstruction. The view would be impossible nowadays."
--- David Bales 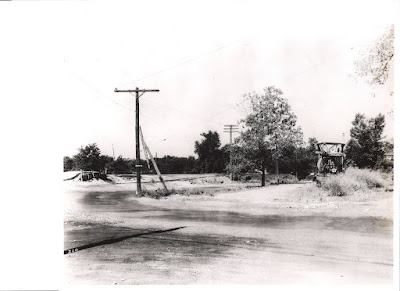 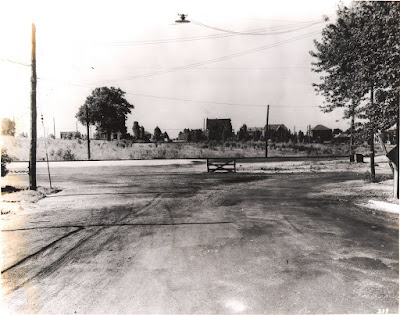 "This fire occurred in the summer of 1985, which was most unfortunate because the structure has an interesting history. The location is directly across Clayton Road from the Galleria Shopping Center. Originally, it was built as the Hegeman Studebaker agency. The rear part of the building had a domed ceiling constructed like the old Arena, without columns. The architectural style of the roof has a specific name which escapes me for now.

In the early '60's Hegeman moved over to Manchester to sell Volkswagens and a fellow named Joseph Wieman purchased the property from Clayshire Drive west to Black Creek. He was the older brother of Hans Wieman, the hair specialist who operated until recently on Brentwood Boulevard. Mr. Wieman aspired to build a restaurant, although he had no experience in the business.

The interior was very well done with Spanish tile on many floors, a huge 'sunken' bar area and chandeliers in most rooms; the entry area with a large wooden chandelier was constructed to the front of the former auto dealership. One interior feature was a solid wooden beam, 40 feet long, and 12 inches square which ran from the rear of the lobby to the rear of the building.

Wieman sold the entire property to Stephen Apted in 1966 and Apted used the name Country Cupboard and then just Cupboard. I was the operating manager from 1966 to about 1971 and afterwards he leased the restaurant to others. As I recall, he wanted to sell all the attached property including the restaurant about 1984 and the Scholarshop Foundation was interested in the area. The fire occurred while workmen were removing old heating units from under the eaves at the rear.

While I worked there, Black Creek would sometimes flood; there was no concrete channel like the creek has now. The restaurant building was at a lower level than the top of the creek, so water ran downhill into the front door and out the back door. Since the hallway was tile, no damage was done."
--- David Bales 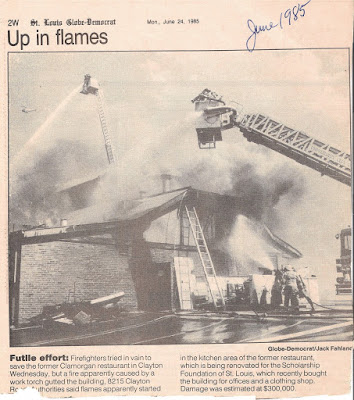 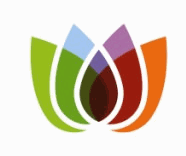